Lakewood Health System took a step into the future earlier this summer when they purchased TUG, a smart autonomous mobile robot that securely delivers medications, specimens and other materials between Lakewood’s laboratory (lab), emergency department and hospital lab draw area.

When the lab was expanded and moved to the lower level (from its previous location on the first floor), it was determined that due to the location change and staffing challenges, assistance was needed in getting specimens and other materials to and from the lab without pulling necessary staff from their tasks.

Enter TUG. Staff in the aforementioned areas simply ‘call’ the robot to their respective department, and following a pre-mapped path, it utilizes special laser, sonar and infrared sensors to override automatic doors and even the elevator, to make its way to the necessary department. Once it arrives and either makes a pick up or delivery, it returns to its docking station in the lab.

Lakewood staff participated in a naming contest for the robot, with Tim-E ultimately being chosen as the winner by the administrative Operations & Planning (O&P) team. The name is an homage to retiring Lakewood President & CEO, Tim Rice. With a name like Tim-E, the robot also needed an updated look, so it recently received a vinyl/PVC wrap, giving it a futuristic robot look inspired by Star Wars. Staff have had fun with Tim-E, giving it googly eyes, dressing it up for holidays and even cheering on the Vikings with a SKOL flag and Viking helmet/hair.

During their visit, Lakewood patients and visitors may encounter Tim-E in the hallway or elevator as it makes its way to its destination. While Tim-E’s sensors prevent it from running into obstacles in its path, patients and visitors are asked to simply walk around Tim-E if they have a chance meeting. 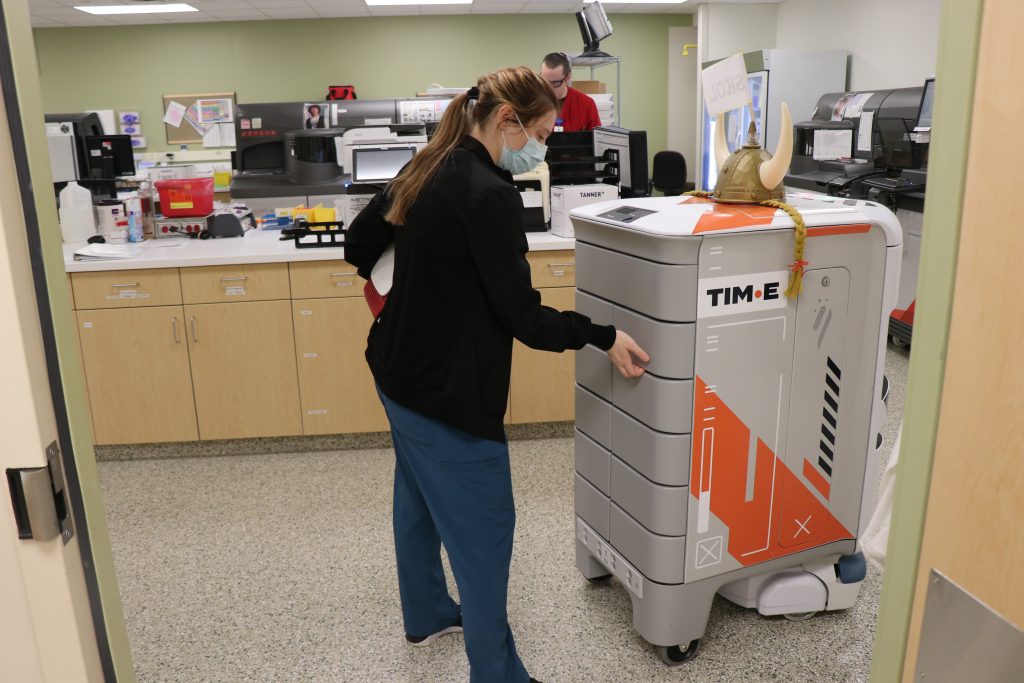